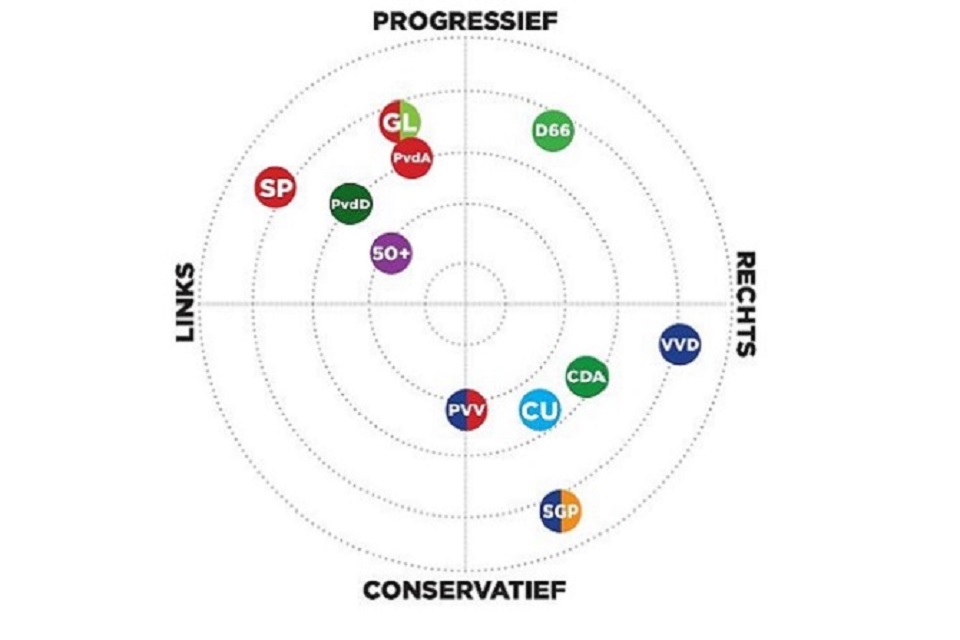 Written by Joes de Natris. This post was reproduced from Policonomy

Today the UN Conference on Climate Change has started in Paris. In expectation of this, last week the Labour party (PvdA) and ‚Green Left‘ (GroenLinks) announced a plan to cut CO2 emissions by 95% compared to 1990 by 2050. This would be a major change to the current Dutch environmental policies, because to describe Dutch policies as unambitious is an understatement:

we perform marginally better than China and the USA. But why is Dutch policy on this issue so unambitious, while policy on other issues is very progressive? I think a partial answer to that question is the strategy of GroenLinks.

GroenLinks is a progressive, left wing and green party, in a country with a proportional electoral system and a highly fragmented political landscape, there are 11 parties represented in the lower house (Tweede Kamer) at the moment. It has never been part of a government coalition, although it got close in 2010, and it was part of a coalition to present a budget in 2012 in order to meet Brussels‘ budget criteria. So GroenLinks has, except for one time, never directly influenced government policy, bar amendments to bills. In 1998, 2002, 2003 and 2010 GroenLinks could have been a useful coalition partner, yet every time it failed to do so. Seeing the dismal state of Dutch environmental policy, and the fact that GroenLinks has always been relatively sizable, ranging from an all time low right now, 4 seats out of 150, to 11 in 1998, it is fair to say the party has underperformed.

I think this is because their strategy is flawed. In The Logic of Democracy Anthony McGann explains how proportional electoral systems excel at protecting minorities. In a proportional system a minority can always be sure to be represented in parliament. Other systems might include certain protections to make sure that some minority is protected, but these protections can never protect all minorities. Moreover, proportional systems are more prone to a process called ‚cycling‘. It has been shown that as soon as there are more than two issues at stake, and more than two individuals which need to decide on policy on those issues, it is very likely that no majority is stable. It is always possible for one actor to break up the current coalition by offering a better offer to one of the two (or more) coalition partners. This constant reshuffling of policy is called cycling, because policy seems to move cyclically. This means that in a proportional system, a minority can always offer someone in parliament a deal to cooperate which is better than the status quo for both cooperating parties. Ultimately, McGann argues, this means that if a minority is fundamentally threatened, it can completely agree on all policy propositions of another societal group, in exchange for protection. This does not sound ideal, but it is better than being completely overruled in case of a system in which you happen to be a minority without formal constitutional protection. However, such an exchange of policy positions is generally possible if two groups have different, non-conflicting priorities.
If we look at GroenLinks as such a minority, a minority which wants to protect the environment with particular urge, we can learn a lot about GroenLink’s strategic failure to gain office. Looking at the negotiations to form a new government in 2010, we see that the conservatives (VVD) were very hesitant to form a government with three parties to its ideological left, D66, PvdA and GroenLinks. VVD was very much afraid to lose seats to the Christian Democrats(CDA) and the Party for Freedom(PVV) if it partook in such a relatively left wing coalition. So in the end it quit the negotiations, and formed a minority government with CDA and support from PVV. Sarah de Lange argues that traditional right wing parties form such coalitions, because they attach great importance to economic issues, and less importance to cultural issues, while this is exactly the reverse for radical right wing parties like the PVV. So, while the VVD had major issues in forming a coalition with D66, PvdA and GroenLinks because of the large differences of opinion on economic issues, it could easily form a coalition with CDA and PVV, by logrolling small government for anti-immigrant policies.

This begs the question, why was, and is, GroenLinks adamant on being left-wing? Looking at the picture above, you can see that GroenLinks is quite extreme on the left-right dimension, very progressive, and, not seen on this picture, of course very green. This means GroenLinks is extreme on all dimensions, making coalition formation with other parties a practical impossibility. Especially because most parties do not seem to be against environmental legislation, but rather indifferent to it, exchanging support on other issues in exchange for environmental legislation could be a viable strategy for GroenLinks. For instance, in 2010 it could have helped creating a government, if it had leaned to the economic right in the negotiations. By supporting the VVD on a lot of issues, the VVD would have felt much less of a minority in that government. In exchange GroenLinks could have asked for more and stricter environmental legislation. However, in real life it failed to join the government, indirectly helping Wilders to gain power (!). Right now it has a leader writing books about ‚Economism‘, which is a made up word to describe how right wing people have this annoying tendency to not want to waste money by using accountancy. Good luck finding sizeable coalition partners except PvdA and the Socialist Party on that platform.

GroenLinks has, thus, historically always barred itself from gaining office. It is too extreme on too many dimensions. It should prioritize on one dimension, namely environmental policy, and to a large extent go with the flow on all others. That way it would significantly increase its chance of gaining office, seeing how splintered the political landscape is, and thus of finally changing the Netherlands’s hopelessly outdated environmental policies to something more presentable to the rest of the world.

Bottom Line: If you are radical on all issues, nobody is going to want to cooperate with you. GroenLinks should start prioritizing on environmental issues, and toss its left wing tendencies aside as much as is need to protect the environment, because we need a clean world.