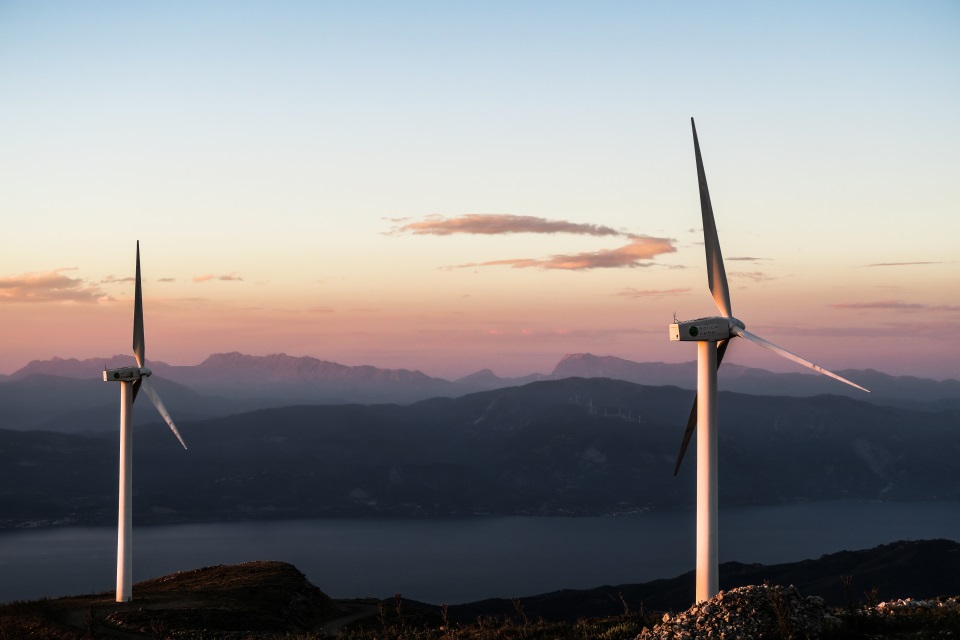 by Morna Cannon and Danielle Edwards

Can a tiny island off the rain-soaked coast of Scotland provide the key to unlocking a more sustainable future for the Caribbean economy? Discover how the green energy revolution could lead the region’s rural communities forward, onward and upward together.

Small Islands, Diminishing Resources and the Promise of Clean Energy 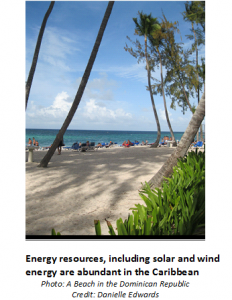 Illegal logging in the Dominican Republic is a big business.[i] It’s an illicit industry worth over €13 million a year, and one that is increasingly being turned to by farmers displaced by rising waters in the Republic’s Lake Enriquillo, the largest lake in the Caribbean. No one is quite sure of the cause for rising waters, but research suggests links to climate change. And this is only a glimpse of the complex environmental challenges Caribbean communities just like the Dominican farmers face.

There is no simple solution for any of the Caribbean’s challenges, where economic growth is continuously under threat from a diminishing, fragile natural resource base. But of all the sustainable development challenges, the goal of expanding access to clean energy deserves primary attention. Success in clean energy promises to cut reliance on fossil fuels and power up domestic manufacturing. These benefits are likely to spill over to low-income communities through employment gains, thereby reducing poverty.

Presently, more than half of the rural population of the Caribbean lives below the poverty line.[ii] For now, the region is highly specialized in the trade of agricultural products, which make up a fifth of its exports.[iii]  However, due to the slowdown in developed and emerging economies, alongside interruptions to production caused by increasingly extreme weather events, economic diversification of the rural economy remains a key public policy consideration.

The idea of using renewable energy as a catalyst for rural development is based on the range of economic benefits associated with clean energy. Renewable energy development can strengthen rural electrical capacity to generate electricity and improve farm productivity.  For example, wind turbines may be installed to support agricultural processing amid cropland without interfering with production. Renewables make it possible to electrify old agricultural activities – like coffee-grain drying – and to use new electric agricultural technologies.

Renewables also promise direct job creation through industrial expansion, particularly manufacturing, installation and maintenance of equipment. Wind energy creates 30% more jobs than a coal plant and 66% more than a nuclear power plant per unit of energy generated.[iv] Taking advantage of the job-intensity of the renewables sector, Brazil has since 2004 developed a new wind turbine manufacturing industry, while the Caribbean has led regional manufacturing for solar water heaters.

Currently, most Caribbean states consume 90% of their energy from imported fossil fuels,[v] which are relatively expensive, due to high transportation costs.[vi] However, given their free, distributed nature, operating costs for renewables can be relatively low once the initial costs of investment are overcome.  Simply put, in the long term renewables can provide more affordable energy for the Caribbean.

The prospect of affordable energy is particularly promising for poor rural Caribbean households which spend up to 11% of their income on electricity,[vii] and tend to be poorer than their urban counterparts.  For example, the World Bank estimates that only 28% of people in Haiti have access to electricity.[viii]

A short journey across the Atlantic Ocean to a Scottish island shows that renewables can be successfully developed in a rural island community. The Isle of Eigg off the west coast of Scotland is 9 kilometres long by 5 kilometres wide. In 1997 a community of just over 60 inhabitants bought the island from its previous private landowner. They spent the next 10 years shaping a project which culminated, in 2008, in the switching on of a local underground high-voltage electrical network generating 24-hour power for the first time in the island’s history. 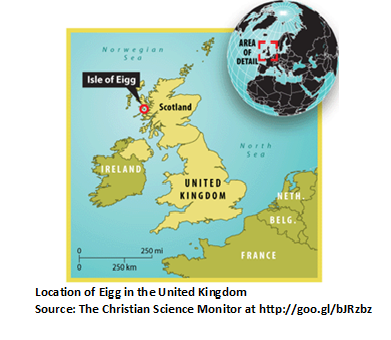 Today the Isle of Eigg is powered by a diverse mix: 119 kW of hydroelectric generators, 24k W of wind generators and 30 kW of solar photovoltaic cells. These renewable resources cater to 95% of the island’s electrical demand, with two 80 kW diesel generators providing emergency backup.  Eigg’s renewable energy industry was financed by community money, and capital grant funding from the public sector. Projects of this type are supported by the Scottish Government through its Community and Renewable Energy Scheme (CARES), which provides loans to community groups for innovative sustainable energy projects.

The most revolutionary aspect of Eigg’s energy industry is community ownership. The system is run for the community by Eigg Electric Ltd, a subsidiary of the Isle of Eigg Heritage Trust. Four out of the six directors of the charitable Trust are elected by the community. With no electrical connection to mainland Scotland, the island sets self-imposed limits for domestic and business electrical consumption – and the strategy is working well.

Eigg’s reliable electrical supply has allowed the start-up of several new businesses including restaurants, shops and guest houses, and led to the creation of many permanent jobs in the energy and hospitality sectors. At the same time, the island’s population has grown to over 80 inhabitants.

What can be taken from this innovative model and applied in the Caribbean? The Caribbean islands are highly differentiated within themselves, featuring a range of geographies, languages and economic influences. Compared to Eigg, the most striking difference concerns population scale. The smallest Caribbean island, Montserrat, has 5,000 inhabitants, while the largest, Cuba, has over 11 million. Extensive electrical networks already exist in the Caribbean islands, but these networks are generally run by monopolies.

There are three significant lessons from Eigg which should guide energy policy in the Caribbean. The first lesson is that it is possible to generate a high-quality continuous electrical supply from predominantly renewable generation capacity, even on the smallest of island networks. 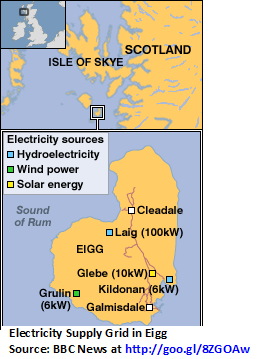 A second lesson is that community management of green energy projects can help to create environments which are fertile for further renewables growth. This model has also been credited for the success of renewable energy in Denmark, where wind energy development is similarly founded on community-based ownership. By 2001, over 175,000 Danish households owned 80% of the country’s wind turbines, either through cooperative structures or individual holdings. This contributed to reduced social opposition to the growth of the sector.[ix] Of course, a third lesson from Eigg is that the development of renewable energy capacity can deliver sustainable local employment.

Applying these lessons to grow the renewables sector in rural Caribbean communities requires resources. Fortunately, many Caribbean islands have extensive renewable energy potential just like Eigg, particularly from geothermal and wind resources. The key to tapping into these resources is a coordinated suite of policy mechanisms, starting with ambitious central government targets for renewables capacity development.

The Recipe for Success

Judging from the successes of the Eigg development, Caribbean energy policies should call for the development of community-owned projects. These policies must be supported by regulatory changes which break the hold of the state-authorised monopolies and open up the markets to more players. The Barbados Declaration, which contains a series of commitments toward developing sustainable energy, is an example of the political will to shift to clean energy.

Next to political will, capital grant and revenue support schemes are essential. Under existing climate mitigation mechanisms and the economic partnership agreement between the European Union and CARIFORUM,[x] significant EU financial support can be obtained, particularly through technology sharing.

Investment in infrastructure will be needed as well. Though, unlike in Eigg, electrical networks are well developed in each of the Caribbean states, network reinforcement may facilitate extra renewables capacity. In particular, the possibility of a ‘Caribbean Energy Grid’ with high voltage subsea links between islands has been recognized by the OAS, CARICOM and the World Bank as having significant potential to increase the usage of renewables across the region.

Finally, land use policies should be strengthened to help facilitate expansion of renewables. State administrators could usefully support surveys to highlight zones with high resource potential and low conflict with competing land-uses. Currently there is a data gap on suitability of locations for wind farms. These efforts should all be supported by public participation, a key factor in community acceptance of developments, as reflected by Eigg.

Forward, onward and upward together

The challenge should not be underestimated. With current low oil prices and decades of reliance on fossil fuels, the Caribbean is unlikely to eliminate reliance on dirty energy overnight. Yet, the case of Eigg proves high-quality, community-managed, renewable-driven generation is possible for even the smallest of island communities. And a recent case shows that the tides are starting to change in the Caribbean, too.  On the island of Aruba, near the Venezuelan coast, the installation of new efficient diesel engines and a 30 megawatt windfarm have cut diesel consumption by 50% and energy prices by 25% since 2012.[xi]

What’s clear is that the Caribbean has renewable resource in spades, and if harnessed it could deliver significant benefits for rural economic development. Opportunities for community scale renewables offer hope of a cleaner, more sustainable future. To put theory into practice, the collaboration of the Caribbean and global partners will be vital to attain a sustainable and energy-efficient future.

[iii] ECLAC, FAO and IICA (2012), The Outlook for Agriculture and Rural Development in the Americas: 2014

[vii] World Bank (2013), Got Steam? Geothermal as an Opportunity for Growth in the Caribbean, Caribbean Knowledge Series

[viii] World Bank (2013), Got Steam? Geothermal as an Opportunity for Growth in the Caribbean, Caribbean Knowledge Series

[x] Comprised of CARICOM, an organization of 15 Caribbean nations and dependencies, and the Dominican Republic.

[xi]The Guardian (2014), Wind of change sweeps through energy policy in the Caribbean at http://goo.gl/cDVv5f