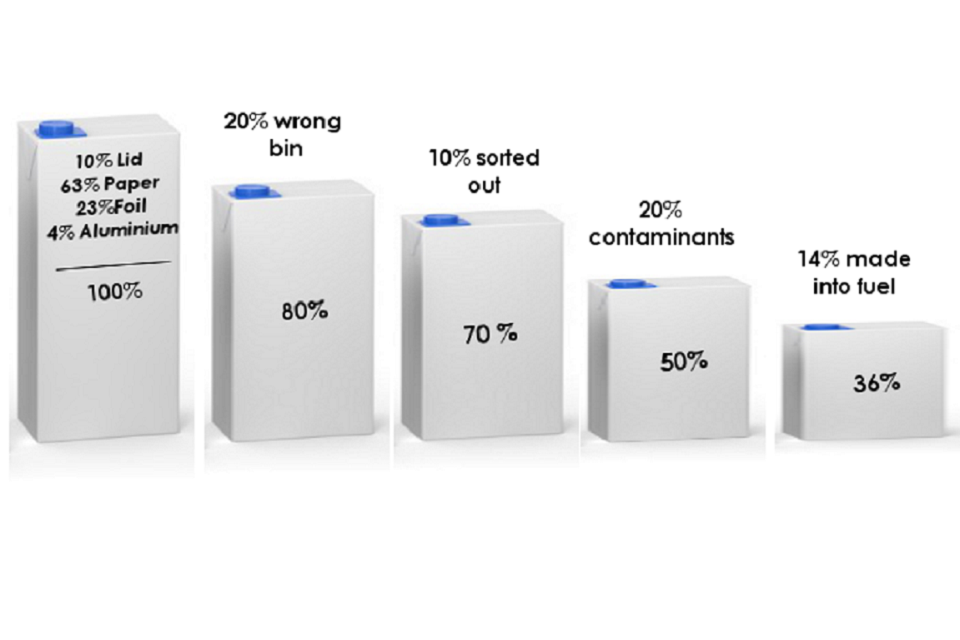 Compared to most other countries we do, in Germany, in a sense, have a quite good system with respect to how we deal with beverage containers. In a sense. While the deposit system is a very good system in theory, there is still quita a lot of containers that somehow manage to elude it.

One such container that I have always bought and then thrown into the recycling bin without further thought are beverage cartons like for instance those from Tetra Pak®. These cartons actually do not have a bad reputation and are seen as environmentally friendly, although I have to admit that for a long I had not even thought about that at all. Until I saw a documentary (see below) on German TV a while ago informing about that topic; that made me realise a few things.

According to this documentary the last study (in Germany) on the environmental impact of beverage cartons was done over 9 years ago – by  the producers of those cartons themselves. This study found that the cartons are almost as environmentally friendly as multi-trip glass bottles. Behind this claim stands the high quota of recycling. The association of beverage carton producers (FKN) reports that around 70% of their containers are being recycled and turned into new packaging. This resulted in beverage cartons being excluded from the deposit laws from the moment these were introduced. If more than 60% of a container is recycled it is seen as being ‘ecologically advantegeous” and can be sold without a deposit. According to this 9 year old study, beverage cartons fall into this category.

However, what was true 9 years ago might be very different today. Instead of consisting purely of cardboard, the cartons also consist of plastic and aluminium for the inner and outer coatings and have a plastic cap. The fraction of these other materials is claimed by the documentary to have increased over time, so that now approximately 63% of the material is paper, 23% plastic foil, 4% aluminium and 10% the plastic cap. The high fraction of these other materials decreases the recyclability of the cartons.

How much of the material is recycled is smartly being measured before the actual recycling. Firstly only 80% of the containers that are sold actually end up in recycling, the rest had been wrongly disposed of in the general waste. Those that reach the recycling plant then have to be separated from the other materials in the recycling bin. This is done partly by machines and partly by hand, still some cartons are lost in this step. After the sorting the cartons are weighed to assess how much go into recycling. This gives a fraction 71% percent of all beverage cartons. If all of these were fully recycled, the quota stated by the producers would be correct. However, since it is complicated to find out how much of this is actually turned into new products, this is actually not assessed. But isn’t that exactly what we would like to know? If somebody tells me that 70% of a certain container is going to be recycled, I assume that 70% is actually going to be turned into a new problem, and not that this is done with an unknown fraction of those 70%. “Sorting is not recycling” is the very appropriate comment given in the documentary. In fact not all of these 70% that are left after sorting are actually turned into new products.

In the program the showed a sample where a carton still contained approximately 3g of juice residue after sorting that were weighed together with the carton. In this case 10% of the total weight of the carton comes from these kinds of foreign matter. Transferred to the 185.000 beverage cartons produced for the German market each year according to the FKN that is a very large amount of residue weight being included in recycling quotas. A different study found that on average even more, namely 17%, of the weight comes from foreign matter. This study was commissioned by the FKN in 2008, but the results had been held confidential until recenctly. I wonder why… If you subtract the residue from the weight of the containers going into recycling you end up with only 50% of the cartons. The beverage cartons thereby fall below the 60% necessary to be excluded from the deposits. The weighing of the residue therefore nicely fudges the recycling quota.

The remaining cartons are brought to a paper conversion plant, where the paper is separated from the other materials and turned into pizza boxes or corrugated cardboard. Basically what you would imagine if you think about recycling (okay, maybe it would be nicer if there would be some more ecologically worthwhile products coming out of it than a container for our fast food consumption, but it’s better than nothing, and besides you can make great things out of corrugated cardboard). As described above however, the beverage cartons do not only consist of paper but also of plastic and aluminium. These are now being brought to utilization plants, where they are not turned into new plastic or aluminium products, but processed into a surrogate fuel, which is then burned in cement factors instead coaldust. Tetra Pak® appears to be well aware of this usage as they had made an advertising spot about exactly this type of reusage, however I was not able to find this spot myself. Processing something into fuel is, according to the Umweltbundesamt (federal office for the environment), not recycling, even though Tetra Pak® and other producers seem to feel that it is. If we now discount the parts of the cartons that are burned for fuel, we end up with a recycling quota of 36%, or just above half of what was originally claimed, and far below the threshold of 60%. For that reason the Deutsche Umwelthilfe (‘German Environmental Aid’) is of the opinion that the typical 25ct of deposit for single-use beverage containers should also count for beverage cartons, since the low recycling quota means that it is ecologically disadvantageous.

The market share of Tetra Pak® is shrinking and they are therefore investing a lot of money into advertising. At the moment it is particularly effective to promote a ‘green’ image. Looking at the Tetra Pak® website, German or global, it becomes clear that this company is also following this strategy; a large part of the site is committed to environmental and climate protection, which would be positive, if they would do what they promise. On the website you can also read that Tetra Pak® themselves have found in a study that 89% of the consumers prefer to buy recyclable products. And officially Tetra Pak® is exactly that. But only, because they shamelessly cheat with their recycling quotas and mislead their consumers. In the words of the Umweltbundesamt: “That’s theoretically possible, but I don’t know which consumers is mislead how much.” Uhm… what? Why would there be any differences? Seriously, even though some consumers might care more or less than others, they are all being misled in the same way. And that even though the problem does not appear to be unknown (Kind of reminds of the recent VW-scandal, it would be great if an American could come over and uncover this impudence, apparently it is not enough if German media report on it).

But on another note, no matter how high this recycling quota is, and if it is actually being adhered to, why is it actually necessary? Would it not be a lot fairer if all beverage containers had the same conditions on the market. Not only beverage cartons, but also the cans, glass and plastic bottles that are still sold without deposits. The deposits don’t only make sure that the environmental impact is reduced by making sure the product is delivered into recycling, but also create a cleaner environment. It encourages people to adequately dispose of the containers, and if they don’t somebody else will do it for them in order to collect the money. Actually, in my opinion there should be a deposit on all containers, be it McDonalds burger boxes (it would be better to not eat there at all, but if they want to live up to their new green log, this would be an important step), or one of my favourite pet peeves: the To Go cups (I think we will give this one it’s own article). Of course there are also issues with enforcing deposits on beverage cartons and other containers. The supermarkets would need a new system for the returning of these containers and invest in new machines. Furthermore especially milk cartons can cause issues with hygiene and smells. To be sure we won’t be able to include the beverage cartons in the deposit law overnight, but maybe we should start today so we have a chance to do so over a few nights?

I have ended the German version of this article with the same recommendation the documentary ended on: Wherever you can take multi-trip containers, preferably glass bottles from the region. This recommendation will be difficult to follow in countries where there is no direct reuse of beverage containers at all. I surely hope that this will soon change, and maybe you can contribute to that change by pushing your governments in the right direction!