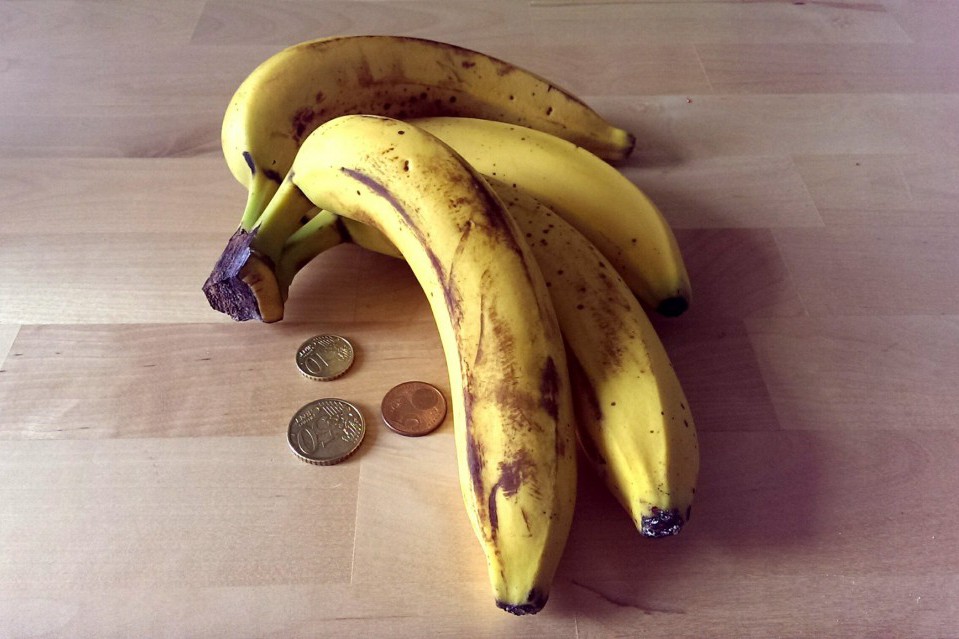 This is the sad story about the most popular fruit in the world. Yellow, sweet and almost as important as bread, milk or rice; among the top 5 of the biggest crop trade products(3): The banana. In Europe, Great Britain is certainly the winner among the banana importers with 1.1 million tonnes (mt) in 2014, directly followed by Germany with 1.04 mt(5).

Bananas became so pervasive, that most people obviously stopped thinking about its real origin and value. Although it is available en masse in any good supermarket, it of course doesn’t grow in fruit boxes. They grow exclusively in the tropical regions of South America, Africa and Asia, whereby main the exporter is Ecuador followed by Costa Rica and Columbia(1). It is a long way from the early shoot into our fruit basket, in numbers that means approximately one year and about 10.000 km (in case of central Europe).

Despite this fact, the banana is the cheapest fruit in our supermarket shelves. Average prize is only 1.20 Euros/kg in Germany or 1.3 US Dollar/kg in the USA, respectively. And not uncommonly, at least in German discounters, the fruit is even available for ridiculous 0.99 Euros/kg(4). Considering the huge production costs and trading distance this is just bizarre. How is it possible that such a valuable grocery is sold at such a loss?

Well, I can promise that it certainly does not say anything about the inner quality of the product. EU norms demand exclusively perfect bananas on the sales counter. That means, proper size (at least 14 cm long), discrete bend (but not abnormal), perfectly timed ripeness and generally free from any deformation (and YES, we still talk about a fruit). As a result we definitely get a nice banana, no matter how cheap it is.

The reason for the dumping prices is much more a brutal price policy of certain supermarkets, second to none the German discount kings like Aldi, Lidl and Co. and it is no longer the big banana enterprises like Chiquita or Del Monte that rule the price(4). Interestingly, it is primarily not even about enhancing the own profit margin, no, bananas rather serve as customer bait, as representation for the whole shop. If the banana as key product has an attractive price, the customer is trapped. A simple but effective sales strategy!

The Aldi price is ruling the banana market not only in Germany (and not exclusively only the banana market), thereby harming environment and human rights. Because what we save round here on our banana purchase, is of course not sponsored by the retailers or enterprises. It has a high price in the producer countries.

Despite hard physical work in tropical heat and daily exposure to noxious chemicals, workers only get the minimal wage – well, if they are lucky. For example, plantation workers of Del Monte’s subsidiary PINDECO in Costa Rica earn on average only 1.07 Euro/hour(4). Long hours are order of business and generally it is not unusual that workers even lack appropriate protective clothing against all the pesticides fumes.

Also the negative impact on environment and climate is huge and actually a story on its own. Besides clearance of rainforests through a continuous expansion of plantations, the heavy use of pesticides that should protect bananas from fungi is leading to pollution of soils, water bodies and ground water. As a logical consequence this is equally affecting humans and wildlife.

So, what do we learn? The price war of (particularly) German supermarkets significantly contributes to human right abuse and environmental problems. An improvement of production conditions is only feasible with higher market prices, and thus not compatible with the ‘all but cheap’-motto of many retailers and consumers.

Certified products as Fairtrade offer such improvements partly and with a different focus*. In contrast to usual bananas, certified are approximately 60-90 cent/kg more expensive (estimated based on my own experience). Since they are placed directly next to the budget price, they unfortunately end up relatively rarely in a shopping basket, which is leading to the situation that the market share of certified bananas generally is still quite low.

*Note: certificates don’t make the world pink and are not a solution for all problems. However, they bring improvements of certain aspects and are therefore an important step in the right direction. Since it is usually not obvious for which criteria a label stands for, we as consumer should inform us on our own. A quite good overview is available here.

That it is also possible to completely renounce cheap bananas has been show by some retailers, including the Dutch supermarket chain Plus, that since 2010 exclusively offers Fairtrade bananas(2). The customers don’t have a choice: those, who want to shop in Plus have to grab the slightly more expensive bananas. No inner conflict between „cheaper” or „more sustainable” anymore. And it didn’t harm the supermarket either, quite the contrary: the sales even increased 10 %!

It is a nice example, that retailers can improve a situation on its own – completely without any policy regulation. They just need to only want to. And what does this mean for us as customers? – Well, we have the power! If we demand certified products, we will get them. Demand determines supply. It is as simple as this.

So, we can change a lot with little effort, just via following some simple (banana) consumption rules

Furthermore, it is essential and without exception for everything I am writing: As PLASTIC FREE as possible! Fair bio products wrapped in plastic is as contradictory as the chocolate diet!

Now it is on you. Do you want to save a few euros per year with budget bananas or do you want to pay the price a product really deserves? Well, I choose number 2.